Explosions of color, vascular in structure 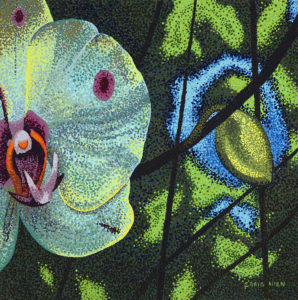 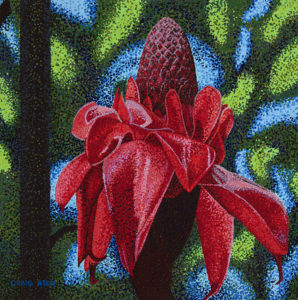 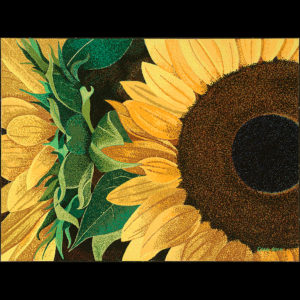 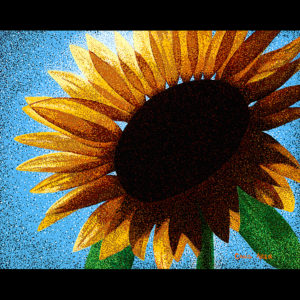 A sense of peace and stillness exist in every breath I take every time I see a field of wildflowers. Contained within the esthetic physical beauty of a flower is a wonderfully complex structure of crucial importance in the functioning of the natural environment. Explosions of color in endless shapes and sizes, they are vascular in structure and the petals I find so esthetically appealing function primarily as a means to attract the plant’s pollinators. Plants and insects have, in fact, long played vital coevolutionary roles in one another’s development and it is the primary reason I paint examples of both lifeforms.

Roughly 266,000 species of plants are now living, of which about 235,000 are those that produce a flower. The fossil record confirms these plant forms dating back 123 million years ago, becoming the dominant photosynthetic organism nearly everywhere on land around 80 – 90 million years ago.

Flowers are an exquisite example of the breadth of manipulative handiwork at reshaping the natural environment achieved by the Homosapien species. Over the centuries, various flowers have been bred and cross bred to achieve the ever more elaborate and beautiful hybrids now available at garden centers and flower shops. There have been unexpected consequences.

In the quest to increase shelf life, produce longer stems, and bigger blossoms, scent has been the unintentional victim of floriculture, and a walk through any florist shop has changed stopping to ‘smell the roses’ to one that is often disappointing. Philosophically and increasingly unbound by technical limits, genetic engineers are at work trying to resolve a problem we ourselves have created. By changing the way flowers metabolize nutrients into chemical compounds (fragrance a volatile compound evaporating into the air) scientists hope to ‘re-scent’ the flower. Along the way, there is promised an ever-increasing panoply that may include everything from novel scents to blue roses and flowers that can glow in the dark.

The ability to manipulate has not been a one-way avenue. Humans have very likely become the plant kingdoms primary method of seed dispersal. Not content to leave them where we find them, we have transported plants around the globe in both our bodies and as potted plants. Many tourists have attracted the unwanted attention by the authorities in Hawaii trying to curb the import and export of plants and the expected soil and microorganism attached to them. This attention often takes the shape of something as simple as an apple or orange in a lunchbox.

Any social media board on the islands will reveal locals of every ilk attempting to identify and decide to keep or kill plants they find in their yards.   The invasive nature of plants cannot be denied when living in such a small ecosystem. Despite often well-intentioned reasons, the evidence of their economic destruction and disrupted nature to Hawaiian biodiversity is acute. Still, our yards and gardens are filled with plants that are not native to the islands, some now considered naturalized and others are of great importance to the economy as a whole. The quest to eradicate the most destructive ones has proved next to futile and their pernicious nature once established well-documented.