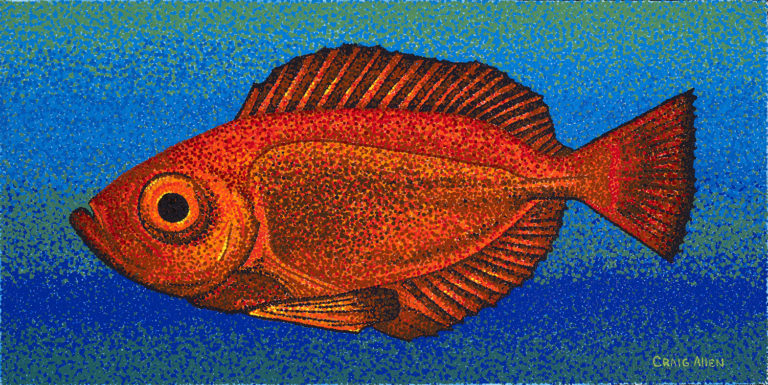 “And the lord spoke to the fish, and it vomited out Jonah upon dry land.” These Sunday Bible school words fell mostly upon deaf ears. I wanted to live among the fish you see; to be able to breathe in the water for oxygen, to swim in the company of my boyhood hero, Aquaman. I held to this dream in both sleep and lucidity; to live as friend in the sea amongst their kind, to be able to school with them in the depths of lakes, to race and rush against the stream and flow of rivers, leaping the falls as I traveled. I fantasized of swimming the mighty Amazon, fearing not the ‘Creature’ from the fabled ‘Black Lagoon’ and navigating the ocean at the side of the ever faithful ‘Flipper’.

My hands were not webbed however, and no gills were ever found present, and no wish seemed to make it so. Contented mostly I had to be swimming among them at the surface with snorkel, mask and fin. I sat spellbound for hours at the side of my aquarium, watching their movements and actions through its separating glass walls. Fish have completely and efficiently occupied the waters of the Earth since their origin. The bony fish I watched are the most successful of the vertebrates, animals possessing backbone or spinal column, accounting for half of all the species assigned to this group.

In the evolution of the vertebrate, the jawless fish were the first, appearing over 470 million years ago, existing as the only member of the group for over 100 million years. They were the first stage in the evolution of the fish we know today. Most of these animals have succumbed to extinction, existing now only in fossil record. Lampreys and Hagfish are the only surviving members of the lineage, surviving in a specialized way of life with few competitors, as parasite and scavenger.

Jaws on fish first appeared 410 million years ago, evolving eventually to a point allowing them to defend themselves and become proficient predators. I stared at drawings of these fierce looking beasts as a kid and played with rubber or plastic models of the later members of their kind. Over time, increasingly efficient fins evolved, improving the fish’s ability to move through the seas, avoiding predators and hunting for food. Gills developed into jaws, skin into teeth and they out-competed their jawless ancestors who began to fade into obscurity.

Sharks, skates and rays were the first members to appear and among the many that have existed, those found in fossils, are the 850 species in existence today. There are currently over 18,000 fish species known on the Earth, a greater number believed yet to be discovered. They are found in exceptionally rich number in the waters of South America and Africa; aquarists and the many fans of the cichlid can attest to the amazing diversity found even among a single group.

Overlapping plates in rainbow hues of color, pattern and design provide bodily protection to the fish. Highly developed lateral lines allow detection in changes of pressure in water; key in their ability to detect prey, predator and other objects. They perceive sound as well and respond to it; a tapping of fingers on aquarium glass a quick indicator of this sensitivity.

Providing food to humankind, fish have long been important in his life. Representation can be found throughout the history of art. As symbol they can be found in Illuminated Manuscripts. In the ‘Prayer to Saint Lawrence’ in the ‘Hours of Catherine of Cleves’ they are depicted in border devouring each other; illustrating perhaps the state of man in the absence of government and law. In socio-moral declaration Saint Augustine warned, “Take care that in preying upon one lesser than you, you are not preyed upon by one greater than you.”

As I grew in age and cognizance, the zodiac became ever more fascinating to me in my search for meaning, reason for existence and later for symbolic representations. Born under the sign of Pisces, at one time I strove to live in accordance with the traits of the sign, was sadden by some I found in myself to be true and was puzzled by others that bore no resemblance. A romanticist, compassionate, oversensitive, adaptable, indecisive, imaginative, escapist; Pisces is the sign of mystery, mysticism and the spiritually unknown, living in the two worlds of reality and dream. I think perhaps that last part is right, and I find myself still wishing and dreaming amongst them on the coral shores of Hawai’i, a place that calls to me as if it where home.