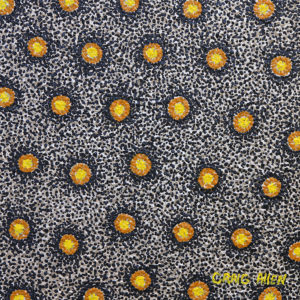 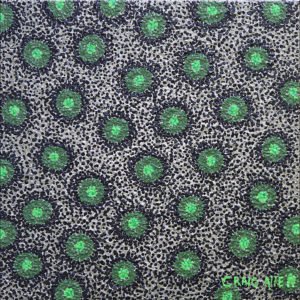 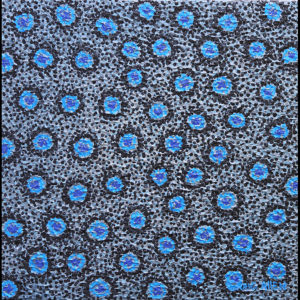 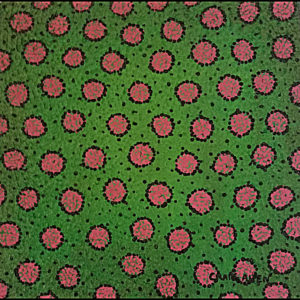 These paintings are representational beginnings of a conglomerate of various biological entities.  From the simple to the complex, they are formed in the textures and colors that contrast and complement each other on the two-dimensional surface. I imagine the individual paint daubs I use as facsimiles of molecules or atoms.  As they accumulate and join, they form cohesive images much the same high the higher life forms are composed of similar particulates.  These words a way for me to articulate and supplement that imagining, the story that is my artwork.

Painting in a pointillist technique is a slow process, a steady building up of many, many points, or dots of paint, to achieve an end result. I am continuously reminded as I work with these dots of color, how life itself is similarly composed.  Everything I see, everything around me is a result of a life process that begins at a sub-atomic level where electrons are found whirling around a nucleus of protons and neutrons, creating atoms that in turn, form molecules.  My artist’s studio has become a Petri dish.

The poet Muriel Rukeyser once wrote, “The universe is made of stories not atoms.”  It is composed of both, I think; the origin and making of the universe being one of sciences most important stories.  It is a classic tale I have fantasized about, read and understood to be true since the days I sat in elementary science classes daydreaming of life in far-away places.  The concept of the atom is meaningful as a part of a complex and ever developing story that has grown to include the Periodic Table, molecules, sub-atomic particles and quantum physics.

The paintings that find their way into this ongoing series are evolutionary branching’s of the concepts I’ve laid out in the group of works called ‘Clones and Replicants.’  Independently self-sustaining, these individual works can coalesce if desired; becoming another cellular part of the larger organic structure that forms in the aggregate of the multi-canvas installation or ‘Constructed Arrangements’ I like to build.

Energy continuously flows through the biological world and I am a biological organism in the process being created and creating at the same time in a continuous loop.  The process reminds me a lot of how ambient music can be created with the use of musical loops.  In that scenario a piece of sound or music can be seamlessly tied together, repeated and used as an underscore for larger compositions.  Painting, making art, is the act and energy of self-expression that is my conduit to fulfillment and self-actualization.  On a very basic level, I relate to my representational and abstract images as being symbolic.  Moving back and forth in my thinking and acting on those thoughts in my painting I am exploring with appreciation the concept that everything, including myself, is a sum of its parts always reducible to ever smaller denominators.