Winged dancers, free-flying flower petals on the wind
Symbols of metamorphosis and change 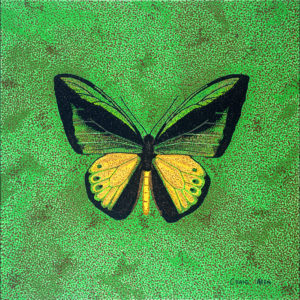 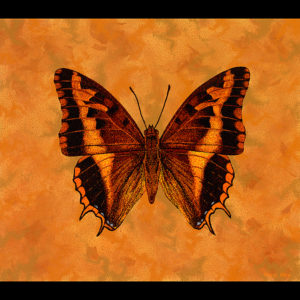 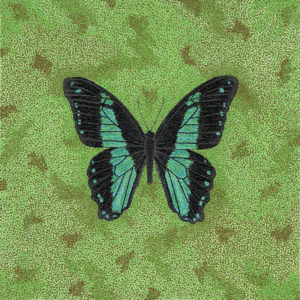 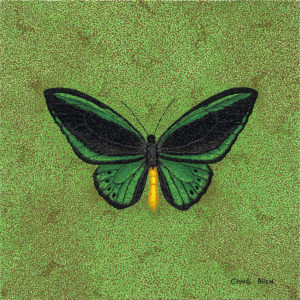 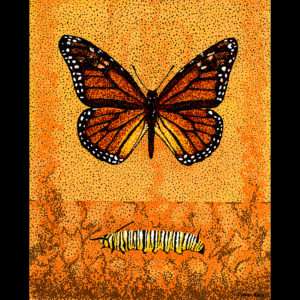 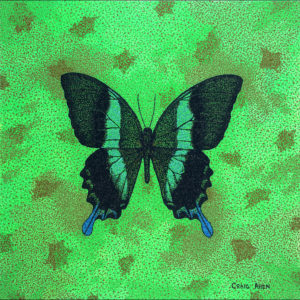 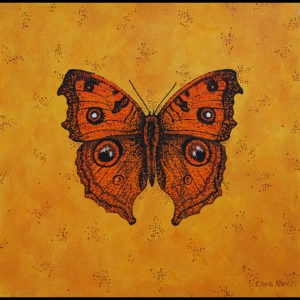 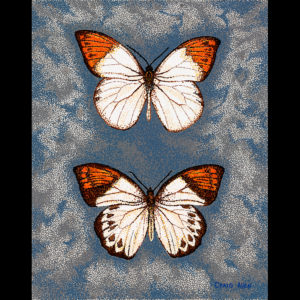 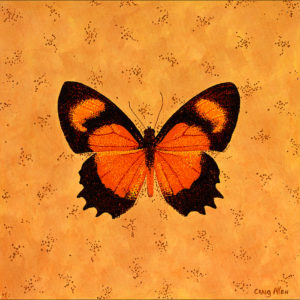 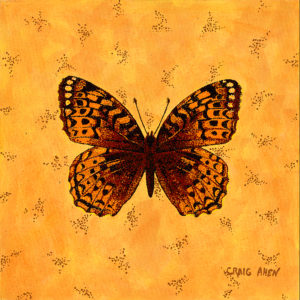 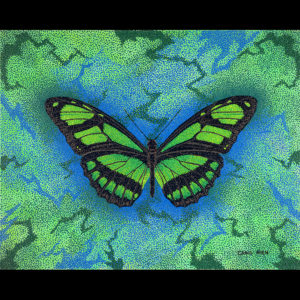 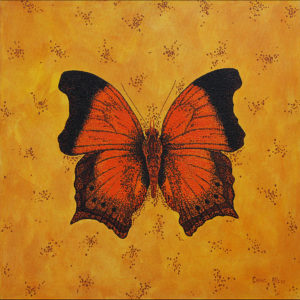 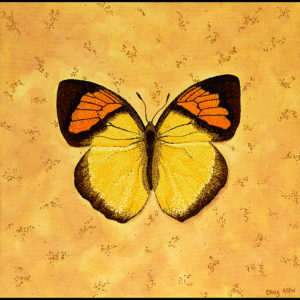 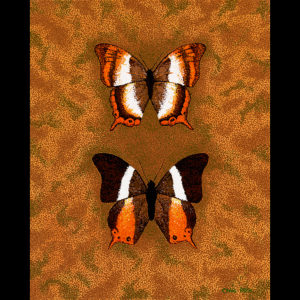 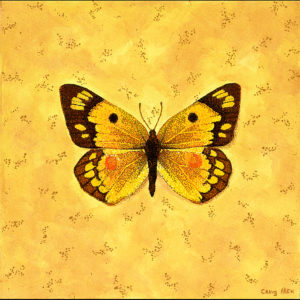 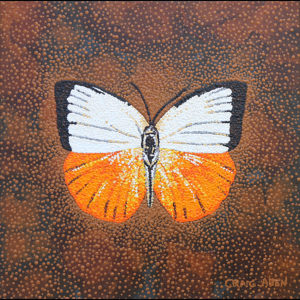 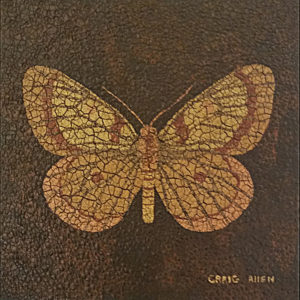 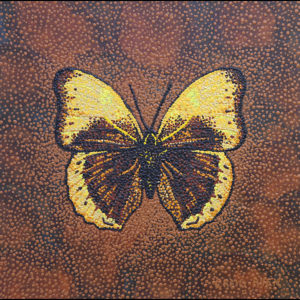 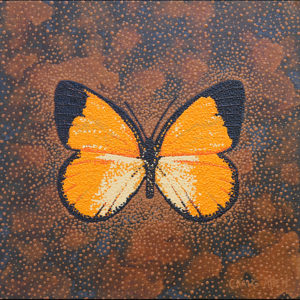 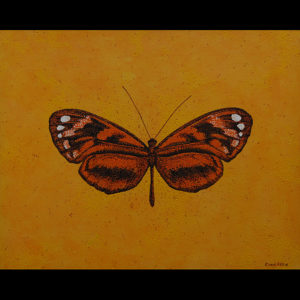 As a child, butterflies were numerous, brilliantly colored, free-flying flower petals floating on the summer breeze; dancing across the cloudscapes, yards and fields of my neighborhood.  During those years, far from my mind was any notion of their mythological or metaphorical intertwining’s as a symbol for death, resurrection, life or spiritual transformation.  Many years later as an adult artist, wanting to transition from black and white ink based pointillist drawings to color and paint, butterflies seemed a simple choice in the search for a colorful subject matter.

I thought I chose the butterfly, but now I am not so sure.  I was soon to enter a period of unprecedented change in my life.  Intent on continuing my pursuit of what had been a “stop and start” artistic career, I had moved to the California desert and was making decisions, both smart and dumb, that would prove life altering.  I had become a journalist for a gay publication and was writing bi-weekly cultural articles.  I was coming out of the closet in a way I had not thought possible in the past, becoming an acting board member of Greater Palm Springs Pride.  I had begun living a life I had not experienced while living in Florida or growing up in Ohio.  It was a period of excitement and heady optimism to say the least.

In the midst of all this wonderful life actualization and affirmations as an openly gay artist and writer who had become politically active and involved in community, I also seroconverted and became HIV-positive.  What followed were medications I initially found intolerant and an ensuing tsunami of life-course changes that carried me from the California desert to Los Angeles, up the coast to Portland, Oregon and across the pacific to the islands of Hawaii.  That initial wave has receded as well as it may; HIV not the death threat it was, but knowing some changes can never be undone the landscape of my life remains changed.

Of the some 20,000-plus species of Lepidoptera, roughly 11,000 are found in the U.S and Canada and as fanciful as they are moving amongst flowering fields, they are less a means of plant pollination; both adult and larvae are more important as food sources for other predators including the birds.  The adult butterfly wing is easily damaged, covered in a series of overlapping scales that come off as dust on the fingers when handled.  The larvae, for all their fierce and formidable appearance, are vastly harmless to humans, but can be incredibly destructive to cultivated plants and crops.

Monarchs and Swallowtails took center stage when I was child.  The Monarch maintaining cultural supremacy to this day with its annual 2,000-mile migration across North America into Mexico, one of the few butterflies to undertake such a trek.

The Monarch and its larvae feed on Milkweed giving them an unpleasant taste and sickening to birds.  The first arrivals in the summer in North America are not the ones who returned to Mexico, but the descendants of those who made that migration and mated while at their wintering grounds or enroute to the U.S the following year.  Throughout the summer they produce several generations, the last being much heavier of body and better equipped for the long flight south that lies ahead.  The Monarch has one of the most beautiful and recognizable of all chrysalises; a gem pale green and spotted with gold.

The Swallowtail family contains some of the most beautiful and largest of all butterflies; the Giant Birdwings of S.E Asia and Australia obtaining a wingspan upwards of ten inches.  The yellow and black stripping of the Tiger Swallowtail was the one I was the most familiar while running through those youthful fields.  I did not know the larvae of this butterfly feed on Cherry, Birch, Poplar, and over various trees and shrubs.

Counted among my childhood favorites were the Whites that drift over the family garden, still as familiar today as they were then.  Notorious, the larvae of the aptly-named Cabbage White wreak havoc with this and other related crops.  Orange Sulphur’s or Alfalfa Butterflies were equally intoxicating and are also considered destructive by farmers causing a vast amount of commercial damage each year.

The ancient Greeks used the word ‘psyche’ to describe both butterfly and soul.  Brahma, it is said, conceived of reincarnation observing the insect’s metamorphic transformations, the Egyptians carved it symbolically into tombs, and Jewish prisoners in Polish concentration camps are reported to have written poems about the butterfly and carved its image into barrack walls.

These stories, histories and myths have offered opportunities of reflection, shedding light on the many roles I play in life and their potential character developing influence.  Although there are different roles set in many different narratives, a few have become habitual providing self-identity.  As I examine these deepening ruts, importance and difficulties in altering my part in some of these stories becomes all the clearer.  The Scottish philosopher Alasdair MacIntyre wrote, “I can only answer the question, ‘what I am to do’, if I can answer the question, ‘in what stories do I find myself a part’.

The artist and the child inside still stand in awe of these artfully, evolutionary drafted insects. Patterns, ripples, swirls, zigzags, teardrops, chevrons, stripes and checkerboards serve to defend, deceive, distract, mimic, communicate and entertain.  Of equal importance I find, contemplating the transformative power contained within the butterfly’s image and using it as a lens of self-inquiry, I am able to look at the question of character and identity more fully.  I can do so with confidence, without dread and fear, with the knowledge I do have the power to change and grow.