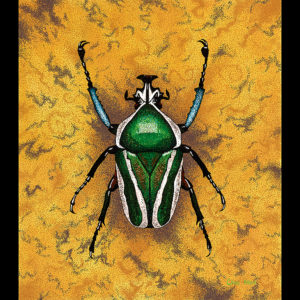 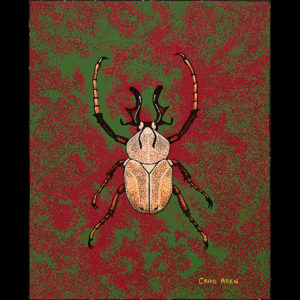 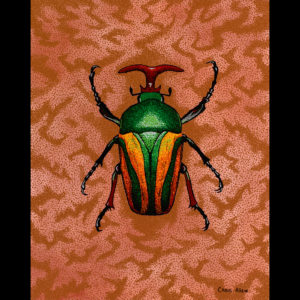 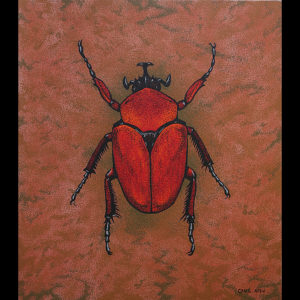 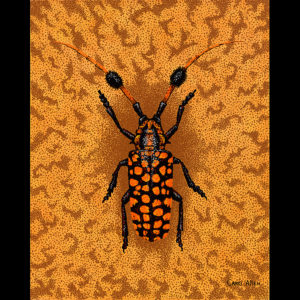 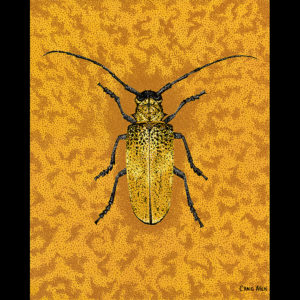 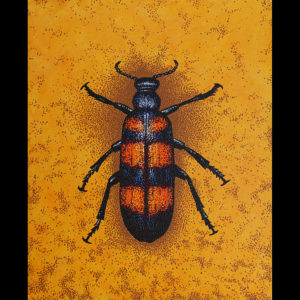 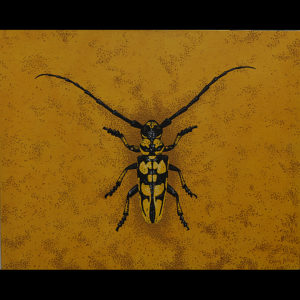 Growing up I was always a bug chaser.  Running free and wild through yards and cattle fields, I was that kid out catching insects of every type with a net, glass pickle jar at hand, nail holes roughly punctured into the firmly fastened lid.  My Mother was always angry when I brought insects home as pets, but I was endlessly fascinated by them.  Particularly of the beetles and the ferocity I perceived in them.  Whether the entertaining and gregarious Whirligig Beetle with its endless gyrations on the surface of ponds, or the dangerous and formidable looking Staghorn or Pinching bug, I was both attracted and sometimes repelled.  The fear is no longer there, but the fascination surrounding their beauty, ecology and mythology has grown immensely.

Arthropods are the most successful of all living organisms in number, species, total mass and occupation of the Earth.  Nearly one million species are known to exist and, at the very least, it is believed there may be two million more.  Among the Arthropods, insects are the largest class and are of enormous environmental importance and affect every aspect of human life.  Among the insects, beetles rule the kingdom, 250,000 having been described with 30,000 of these occurring in the U.S and Canada.  If examples of every plant and animal where put on a list, every fifth species would be a beetle; representing one fourth of all animal species they are, by far, the largest group varying greatly in shape and size.

Beetles typically having four wings, the first two of which normally only serve as protective sheaths; the back two wings are usually longer, membranous and fold up under the front wings when at rest.  Their mandibles can be slender and sharp, designed for piercing and draining, or stout and well suited for crushing seeds or gnawing on wood.  The metamorphosis of the beetle is complete and the larvae vary considerably in the different families assuming seven different forms, including a worm-like grub, the most familiar to me growing up.

The beetle’s habitats are also incredibly varied; many are subterranean, many are aquatic or semi-aquatic and often confined to specific types of soil or geographic areas.  Their lifecycle can vary from four generations per year to one in several years.  A very few beetles are parasitic; they also eat plants, mold or fungi, and act as scavengers or predators.  The original recycler, by eating plants, animals and their remains, they perform an important ecological function, returning organic matter to the soil and, in turn, provide food to animals, plants and humans.  While many beetles feed on snails and destroy insects considered injurious to humankind, many are considered pests; we are aware of those in our gardens and houses, we primarily hear stories about the ones that destroy crops, fields and trees.

Growing up, many beetles I saw and did not recognize as such, and some where unmistakable in form and action.  The Firefly was one that commanded much of my childhood attention and I would chase these around the yard catching them in jars with neighborhood friends and siblings.  Their conspicuous blinking yellow light, typically a mating signal, is an example of cold heat; nearly 100% of the energy given off generates light in comparison to the electric arc light which uses only 10% of its energy for light and spends 90% as heat.  The luminous glow is generated through the oxidation of a substance called luciferin, which the insect controls by regulating the flow of oxygen into the light producing organ. Each species has its own unique flashing pattern; the females of the more predatory family members will imitate the flashing signal of other species and lure hapless males to their doom.

The well-known, bright and distinctively marked Ladybug beetles have always been a favorite.  There are 475 species in North America, adults hibernating in large groups over the winter, they are predaceous and feed on scale insects, mites and aphids making them a friend of farmer and gardener alike.  Included in this family however, are also the Mexican Bean Beetle and the Squash Beetle who, for reasons indicated by their name, do not enjoy the ‘favorite daughter’ status of their kindred.  Many beetle families are similar in this regard; some family members are considered helpful while others are viewed as damaging. Illustrating the complexity in an attempt at any single designation, destructiveness in one stage of the insect’s life does not necessarily preclude it from being of benefit in another stage, or from being beneficial in some situations and not others.

The all so familiar Japanese Beetle is one insect notoriously destructive and I can remember years when they were so thick in the lawn it was impossible to walk without crushing scads of them.  These beautiful metallic insects were introduced into the U.S from Japan on nursery stock in the 1950’s and they have spread widely across the eastern parts of the country.  Overwintering in a larval stage there is only a single generation each year and they cause significant economic damage to lawns, golf courses, shrubbery and fruits.

Many warm nights were spent dodging June Beetles common around lights in spring and early summer.  Munching away on foliage and flowers at night, their well-known white grubs are equally destructive feeding in the soil on the roots of grasses and other plants. It takes this beetle 2-3 years to complete a lifecycle and in that time they severely damage lawns, pastures, crops of corn, grain, potatoes and strawberries.

Without fail beetles always seem to encompass this type of range in benefit and destruction.  They are of value as scavengers removing dead organic matter, but some will also eat your carpet, clothing and upholstery.  One species in the Bostrichadac family gained notoriety as the ‘Short-circuit Beetle by boring through the lead sheathing surrounding telephone cables resulting in service interruptions.  Other beetles are small enough to ride around on the backs of ants. Some beetles are almost comedians, such as the Bombardier Beetle, that ejects what looks like a puff of smoke from its anus; scientists are unclear whether this serves as protection or is an offensive tactic.

For centuries beetles have been revered as both symbol and shamanic token, the scarab the most famous example. Beetles have been worn as ornaments, carved into temple walls and equated with the gods. Considered majestic and magical, they were seen arising from the earth and dung then taking to the sky.

Technicolor and metallic, stripped, dotted, fury, hard or shiny beetles are an irresistible attraction that make full use of my painter’s pallet. We spray them, praise them, kill them, curse them, stomp them and import them and still they persist and have done so far longer than the species of man. In their glory, beauty, marvel and sometimes horror beetles are an intricate part of the world that I inhabit.